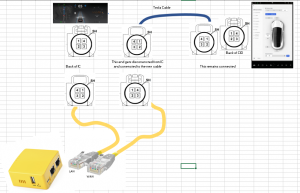 Based on your Tesla Model and included packages, you'll want to follow the corresponding installation guide for Power. We'll need a 12v constant power supply. Places like the USB outlets or 12v accessory outlet are not good because those switch off when the car is "off". If you have an AP1 car or have completed the full AP1 retrofit and you aren't using it for OpenPilot power, you can just use the empty OBD port or tap the power line that goes to the OBD port behind it for a permanent install.

There are different power options for accessories depending on the year your Tesla was built and the packages you have installed.

Once you identify the fuse you will tap, remove the original fuse and, using a voltmeter, identify the side of the fuse socket that has the permanent 12V. This is important to know because otherwise you will end up running the circuit through two fuses and create issues. The side without the wire of your fuse tap should go where the 12V constant power was identified. Place the original fuse in the lower fuse socket and use the new fuse for the TB power circuit in the upper socket. See diagram below.

Once you're done running power we can move on to powering up the Tinkla Buddy for the first time.

Powering up the Tinkla Buddy for the first time

Then while the Buddy is unplugged from power, remove the RJ-45 barrel and insert the RJ-45 cables into the correct jack on the Buddy.